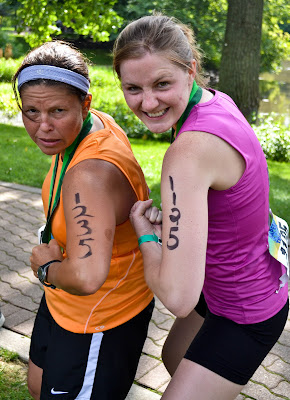 Today was a big day for me.  A huge day.  Today I competed in my first sprint triathlon - really there was no competition just a fight to finish but finish I did.  Fortunately I was not alone in this adventure; my aunt-in-law Sally bravely battled this beast with me.

A sprint triathlon is a 400 meter swim, 22k bike and a 5k run.  Breaking it down it really isn't too intimidating - at least until you sign up and have to wake up at 4:15 am to get there with your bike and gear.  My stomach was tied in knots the entire time.  Plus everyone looked sooo professional and we looked so like first-timers.  Putting our bikes on the racks wrong, mixing up our numbers, putting our chips on the wrong way.....it wasn't pretty.  We did prepare well when it came to packing our gear though. 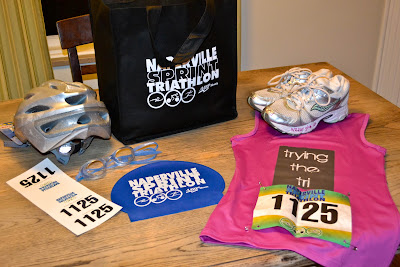 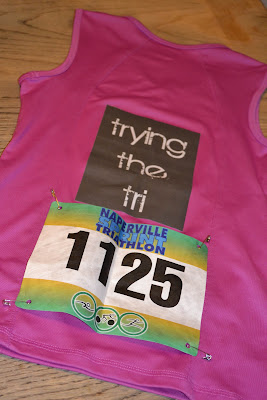 We made fabric decals for our tank tops.  We surprisingly got a lot of compliments and questions on where we got them!  Yea fabric paper that can go through the printer.  They took like 10 minutes.  We also wrote on our shoes all sorts of encouraging and inspirational words. 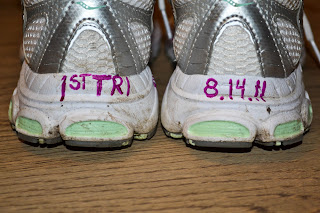 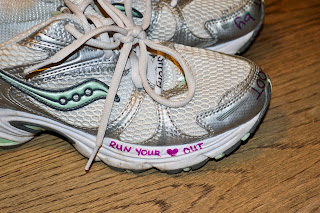 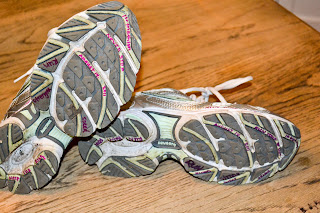 I even wrote on the soles of my feet to see how worn down it would be by the end.  I was way too tired to take a photo after.  Defeats the purpose but oh well.

And you can't forget your helmet.  They won't let you race without one.  I borrowed a helmet from one of Sally's friends but the day before the race Lola found it and destroyed it in a matter of seconds.  I would hate to see what those helmets look like after a bad fall......hope they hold up better against cement than they do against teeth. 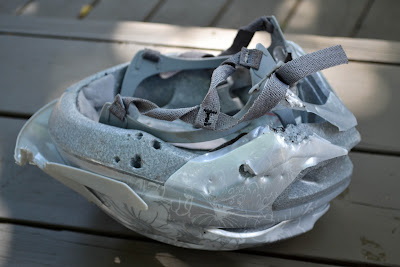 Fortunately Target had one last matching helmet and it was on sale! 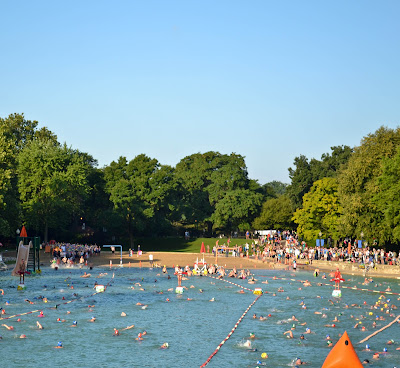 Going into it I was the most nervous for the swim.  I am not a strong swimmer and well there have been some recent fatalities in the swim section of triathlons which the guy opening up the race so kindly pointed out.  Not exactly encouraging as you are standing in the most ridiculous spandex gear with rubber heads and shivering bodies.  It was pretty cold this morning and I was worried the water would be freezing but it was actually perfect!  Very very nice and kind of on the warmer side.  The swim was not as bad as I was anticipating and we made it through quickly and without issue.  Fortunately there are no pics of us in our makeshift "tri suits", swim caps and goggles. We looked quite hysterical. 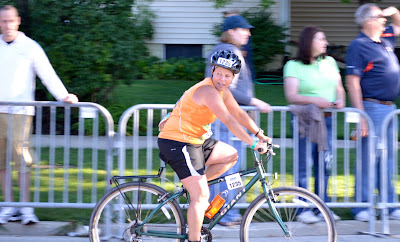 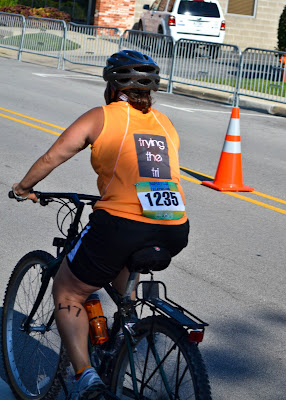 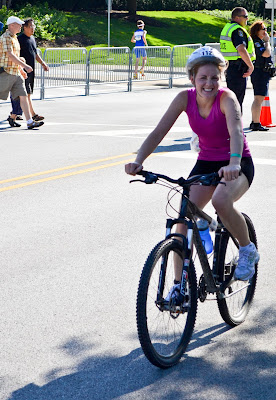 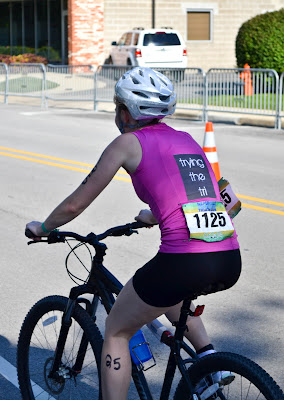 However, the bike was a different story for me.  I struggled all the way through the bike for some reason.  Like really struggled.  I went into it least worried about the bike.  It just seemed like a piece of cake.  Which I think it was for Sally.  She did great.  Apart from pushing through the crazy winds it was a nice route and Sally just kept on pedaling.  I never lost sight of her (thank you Sally for not ditching me) but it took everything in me to keep up with her.  I was so nauseous for the entire bike ride.  I was so glad when we reached the transition area to start our run.  I've never been so excited to run.  I may be done biking for a long while. 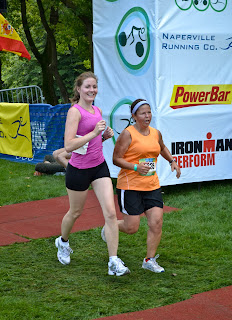 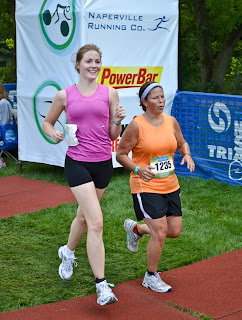 The run was great though.  Granted it was only a 5k but I thought that it would be horrible after the swimming and biking.  I really felt strong and fairly fresh for the whole run.  We powered through the it at a very nice pace and actually crossed the finish line!!  We did it and we did it running, not crawling.  We have no idea what our time is.  Really no idea.  Somewhere around the 2 hour mark.  I hope they post the results soon. 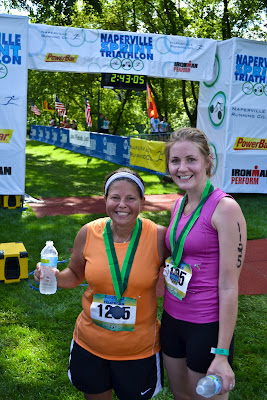 The time on the clock isn't what we finished in because we didn't start our swim till way later.  I know we definitely hadn't started swimming until at least 35 minutes into the race.  Very curious. 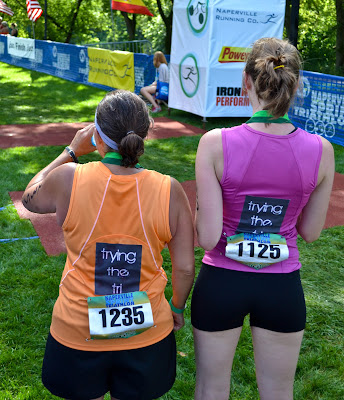 I am really proud of Sally (and myself) for sticking to our training, for being brave enough to actually sign up and show up and especially for completing it.
I think I got it out of my system though and may just stick to running.

Off to bed.....I'm way tired.
Posted by Unknown on Sunday, August 14, 2011
Labels: Weekend Fun
Email ThisBlogThis!Share to TwitterShare to FacebookShare to Pinterest

That is so awesome! Good for you! I don't even know you but I'm proud of you! I'm training for my first half marathon and I'm pretty excited! I hope you feel really accomplished because you should.

SO jealous! I've always wanted to do a Sprint Triathlon!

Oh thank you Brooke! (love your name by the way) way to go with the half marathon. that is quite a feat - one that I could never do. best of luck.

Claire - you should sign up for one or at least look into training for one. I'm so glad I did it.