Can I tell you a secret? 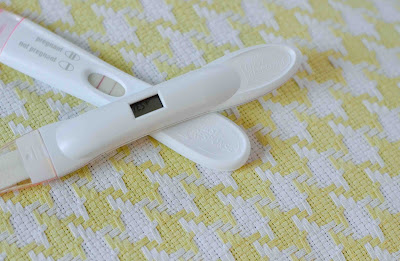 And yes, we are totally freaking out in both the "oh my goodness it's finally happening!!!" and the
"oh my goodness what have we done?!?" kind of way.

Here are the current stats:

Due Date: September 27, 2012
Week: 10
Baby K: Baby K is the size of a kumquat and growing rapidly.  Baby K is swallowing fluid and kicking up a storm.  Little nails are forming on the tiny fingers and toes (no more webbing) and peach fuzz hair is beginning to grow on the tender skin.  Oh and good news....baby no longer has a tail.  Phew.
Symptoms: Giant, swollen chest.  My chest aches and can I just say that one side was very visibly larger than the other.  I was a total lopsided freak for a few weeks there.  So embarrassing!  I haven't had any morning sickness (yay!) but I have been absolutely exhausted from the beginning.  I keep reminding the hubby that my body is essentially running a marathon every day creating this little babe.  I'm sure he is so sick of it but it makes me feel better when I am cuddled up under layers of blankets on the couch - usually sleeping.  But generally I have felt great and sometimes even forget that I am pregnant.  Even so, I am excited to get into my second trimester.  Just a few more weeks.
Cravings: Not really.  I am already a creature of cravings so this may or may not be related to pregnancy (I say not) but I am addicted to grapefruit right now.
Aversions: The smell of ketchup.
Bump?: Does bloat count?  No bump, just thick around the middle.  V E R Y  T H I C K.
Looking forward to: It not being a secret anymore.

Ok, so that is all this emotionally confused and exhausted soon-to-be momma can take.  I'm off to my best friends wedding in Cali!!! So happy for her and so excited to see her.  Then I'll be back with more details like how I told Bran and our families and whatever else comes to mind.  For now I need to absorb that the news isn't private anymore......

And I'll leave you with the standard ultrasound photo of Baby K. 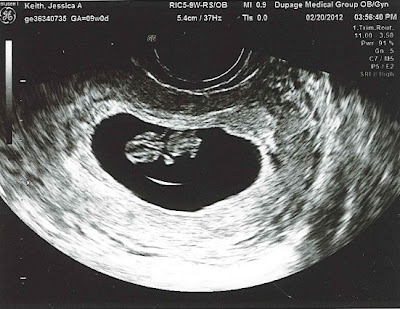 Update: Hudson's trip to the neurologist 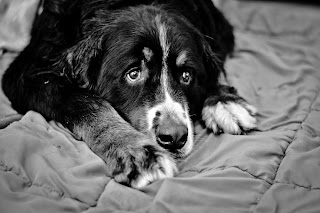 This Valentine's Day we have heavy hearts.  Hudson visited the neurologist and we didn't really get the news we were hoping.  Well we did but we got triple the news we were wanting which really turned out to be a bad thing.

Our hopes going into this visit was that we would find something wrong with him that was operable or treatable.  I know that sounds counter-intuitive but he has been through so much and he has been getting so much worse we really wanted to hear that there was a clear problem - something real and tangible causing these symptoms.  Something so clear and obvious that there was a clear cut solution.  Remove a tumor, relieve swelling on his spine....whatever it would be. 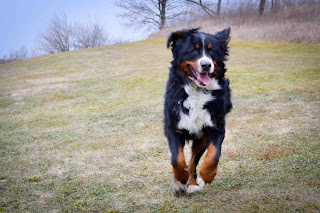 Well we learned today that Hudson has several issues all affecting his spine.  All in different locations and all with different symptoms.  They were not able to do the MRI since the patient is in their care for 2 days and must be sedated (and in costs an arm and a leg) so we won't get these things confirmed until we decide if we will move forward but they are very sure he has Wobbler's Syndrome.  There are two kinds and Hudson has Cervical Stenotic Myelopathy.  It is common in young large breed dogs, specifically Berners, Great Danes and Mastiffs.  It is where the vertebrae in the neck are compressed causing a wobbly gate.  Now it is also believe that he has this in three locations on his spine, the neck, middle and lower end.  This is what is causing him to drag his feet, trip, go weak in the back legs, and not shake.  It is degenerative so if not treated it will get progressively worse until paralysis essentially.  The typical treatment would be surgery but the vet did mention acupuncture as well - yes acupuncture for a dog.  I have no idea who does that but apparently someone does.

Now this was the type of news we were hoping to receive.  However, since they believe he has it in three locations instead of just one his prognosis is not as good.  They are not sure they would even try and operate on him since that would be too much for one dog to handle.  Three incisions and three surgeries on the spine.....yikes!  Again, an MRI would confirm this and give us more details as to whether there really are 3 locations and how severe these compressions or lesions are.

Unfortunately, that wasn't the only thing they think he has.  They also have suspicions that he has meningitis.  Personally I am less convinced on this one.  First of all, they told us he was not in any pain and apparently menigitis is painful for the dog.  Secondly, he doesn't seem to display many of the symptoms but since menigitis is a swelling of the spinal membrane and his spine does appear to be damaged it could be that.  And of course, he could have swelling of the membrane due to the compression and lesions of the spine from Wobbler's.  It's just so hard to know.  The only way to confirm menigitis is with a spinal tap.  They would only perform this if we went ahead with the MRI since they would have to sedate him for both. 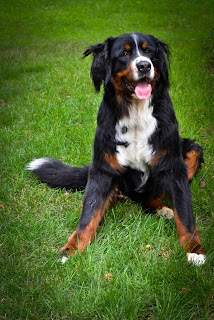 Lastly, they believe he may also have tumors.  Tumors are very common in Berners and these too could cause compression on the spine or other organs and could be interfering with his normal functions.  Depending on the location, amount and size these may or may not be operable.  If we went ahead with the MRI and found tumors and decided that they were operable they would test them for cancer.  If cancer that would be a whole 'nother can of worms I don't want to think about.

However, with all of these scenarios they do not believe that Hudson will gain back his ability to hold it - if you know what I mean.  We may need to invest in a lot of XXXL diapers.  I can't imagine what I will find in those - he is a big dog!!

The best news we received was HE IS NOT IN PAIN!!!!  It doesn't make it all better at all but it helps.

So there you go, a complete update on Hudson's visit.  We have a lot of tough decisions to make and will be taking our time to prayerfully discuss together and determine what is best for Huds and our family.  In the meantime I probably won't be giving any more updates.  I know this isn't a puppy blog and as soon as we get through this little hurdle I will get back to my typical crafty, DIY projects and hopefully some much more uplifting content.

Thank you, thank you for all your thoughts and prayers.  Your support and encouragement really means a lot!!

hudson is visiting the neurologist

I mentioned a long time ago in a post that we have been experiencing some health issues with Hudson our three year old Bernese Mountain Dog.  It all started as a funny waddle-limp when we first brought him home.  Nothing cuter than this chubby ball of fur stumbling around the yard.  Soon we stopped laughing though and realized that things were getting worse and not just the product of a clumsy puppy. 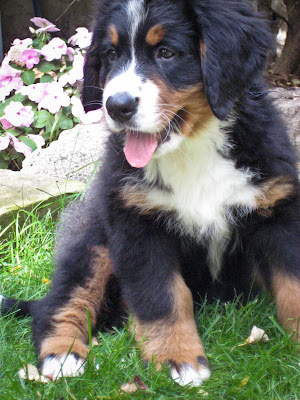 As he grew the waddle limp turned into just a limp and suddenly he was no longer potty trained.  That was the biggest wake up call.  When your fully potty trained one year old pup suddenly starts having accidents of all types all over the house you worry.  You worry a lot.  And if we weren't worrying enough then, the sudden depression and anxiety threw us over the edge.

Countless vet visits later and dwindling pocket books we were told that physically he is in perfect health and that it is all mental and we need to visit a dog behaviorist (aka a dog psychologist).

Not joking. We did it.

And we were told that Lola was abusing him. 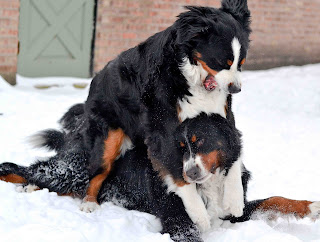 I just don't see it. 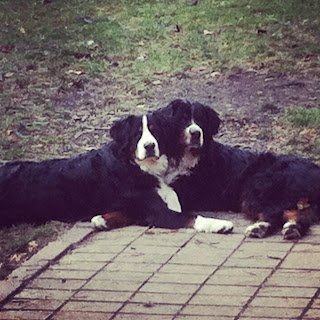 But really they love each other and they love to play together.

We were skeptical about the abuse but the behaviorist did give us a few good tips to get Hudson's mood back up and that alone was worth all the money in the world.  Hudson may still trash my house with his bodily fluids but at least he does it with his tail wagging and a big grin on his face.
Apology accepted.

The final straw though was when he stopped being able to shake.  As in wet dog trying to shake but nothing happening.

Something is seriously wrong with this sweet guy.

Finally another vet confirmed our fears - it was probably something neurological.  Either a tumor on or near his spine, or some type of nerve damage that gets worse as he grows or a tumor grows.

That is why Hudson is visiting a dog neurologist - in Madison.  Several hours away.

But I can't complain because I am not even the one taking him.  My wonderful mother and mother-in-law are taking a road trip with him and doing this for us because we can't get out of work for it and they love us but they may love Hudson more.

Are they not the BEST GRANDMAS EVER!?
I am so blessed and so appreciate all the things they do for Bran and I.

And in case you are still reading this and still care (Mom you don't count) then come back next week and I'll give you an update on the appointment.

Until then the curiosity will be killing me!! 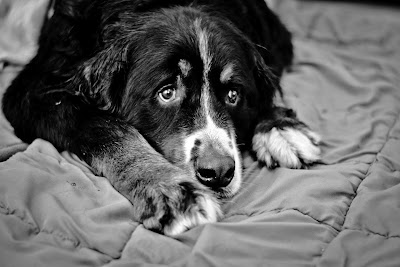