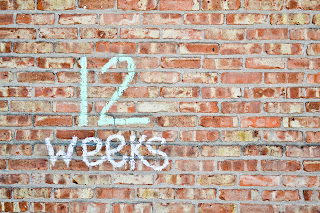 It has taken me 12 weeks but I finally took my first set of belly photos.  Actually it is more like pre-belly photos since nothing is there except for the massive bag of candy I ate last night (and then again this morning for breakfast - shame).  I am so happy that my dear friend Kara is taking some of the photos for me - they will be fabulous.  Until those photos are ready bear with me with some of my own that the hubby took.

I have to say I was a bit distressed on what to do for this weekly documentation.  I have been feeling the pressure to do something unique, new and fun.  Unfortunately Pinterest has killed my originality.  There are so many adorable and creative ideas out there, why would you ever need to think of your own?   That is why I gave up and just took the photos against our house.  The wall isn't going anywhere, it's close to home since it is home and fortunately this will be a spring/summer pregnancy.

I think they turned out great and will only improve as the bump improves.  The contrast of the white against the brick is perfect to showcase the growing bump.  I especially love the black and white ......although the color is nice too.  I actually can't decide.  I am eventually going to make a pregnancy photobook/journal so I think mixing it up might be nice and give it a little interest.

What do you think? 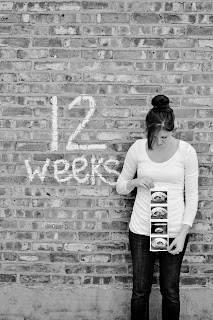 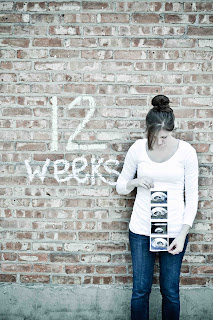 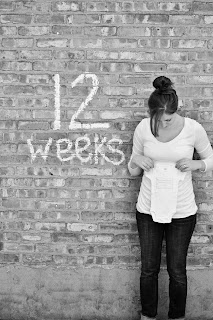 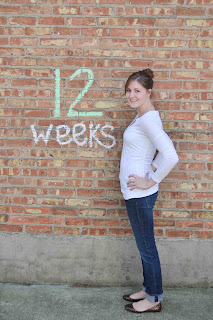 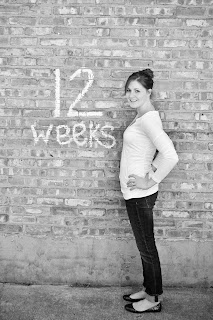 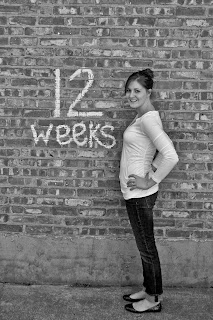 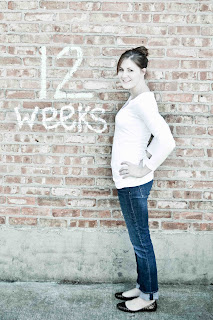 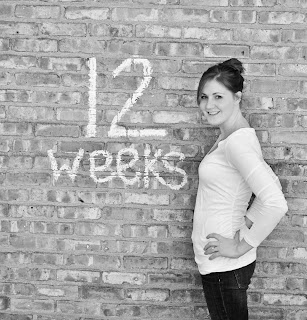 Actually this one with just a little color. So indecisive. 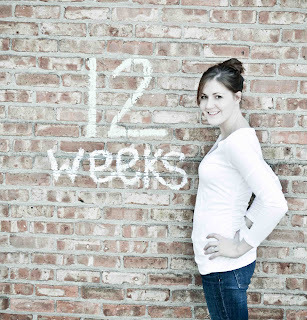 Week: 12
Baby K: Baby K is the size of lime at just over 2 inches from crown to rump and weighs half an ounce.  So tiny but it finally looks like a baby.  The crazy larvae, shrimp, peanut, alien stage is finally over.  The head to body ratio is finally balancing out and the eyes have moved to their final space as well as the ears.  The arms and legs are stretching out and moving a lot.  At my last ultrasound the baby was in constant motion - waving to us and doing an insane amount of sit ups.  The baby definitely doesn't take after me.  The baby is also making sucking movements and is now moving it's toes and fingers.  We could even see the fingers and toes in the last ultrasound.  So sweet.
Symptoms: Still no morning sickness - thus the candy.  My energy is finally returning too!  At this point I would say that I may back to how I felt before I was pregnant.  I'm ready to feel pregnant (in a good way).
Cravings: Still no real cravings except the grapefruit.  I am eating several a day.
Aversions:  The smell of eggs and ketchup.
Bump: No bump but if I try and suck my fat in it no longer goes anywhere.  I guess it is running out of room since the OB did say that my uterus is making it's trek above my pelvic bone.
Looking forward to:  A real baby bump.
Missing the most: Dr. Pepper

After the news of our expected bundle of joy started to settle in a bit for Bran and I, we started talking about how we would tell our family.  With our birthdays only being a few days apart in Jan./Feb. we decided to mask a joint birthday party as baby announcement party.  Our new obsession has been Top Golf so we decided to get the two families together for a fun afternoon of Top Golf followed by birthday cake at my parents.  They fell for it all and didn't suspect a thing (evil laugh).


(you can read about our first trip to Top Golf here) 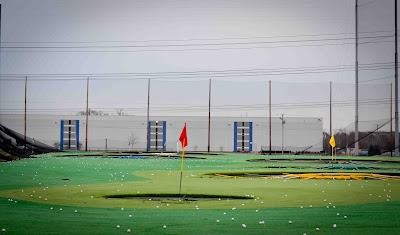 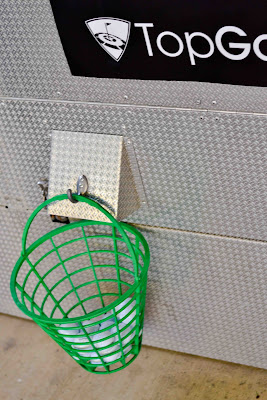 Once we had the family all gathered in one place we had to figure out how we would tell them.  For some reason it seems awkward when you just stand there and say it.  I still can't get over telling people, "Hey, I'm pregnant."  So I've been figuring out other creative, non-vocal ways of sharing our news.  For this occasion we had shirts made that said either Grandma, Grandpa, Aunt or Uncle. 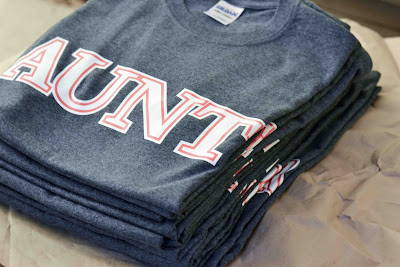 In order to make it a surprise we decided we would roll up the shirts, stick their names on them and tell everyone that we split the group up into teams to compete against each other and their team names are on the shirts.  That way they would have to open them all at the same time to see what their team was. 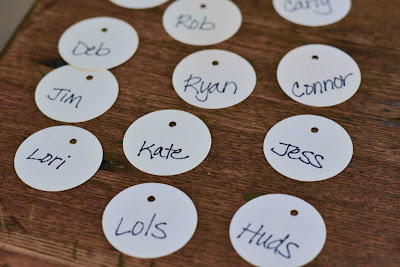 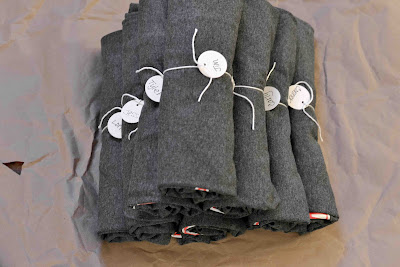 Unfortunately our plan didn't quite work.  Only one of our bays was available for the first round of golf so we couldn't make the team idea swing since only 5 people could play at a time - we had 10.  So we took turns. I also didn't take many pictures at all since I was getting nervous and it was freezing.  It was a photography fail so there are no photos of the "surprise".  If you can even call it that.

By the time the other bay opened up everyone was cold and golfed out so it was decided there would be no round 2 and no teams.  So we just threw the shirts at everyone and said we were suppose to do teams but it didn't work out.

They all threw their shirts on the ground or table and carried on with their golfing, talking or eating.

Fortunately one person likes t-shirts.  My MIL.  She opened hers up and SCREAMED.  The news was out.  There was this awkward pause while everyone stared at her and her shirt and then at us.  Then the hugging ensued.  Some tears and a lot of disbelief.

At least they were surprised. 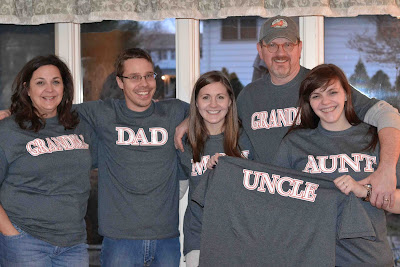 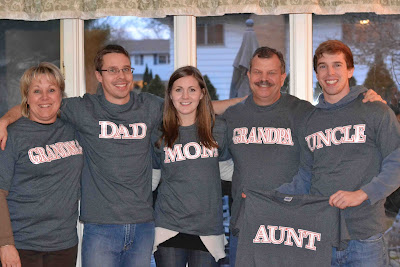 Did I mention this is the first grandbaby for both sides?  Craziness.
We were sad that Ryan, Carly and Connor couldn't be there.  Well Connor was their for the golf and announcement but we scared him away with baby talk so he didn't make the photos.  Sorry Connor but thanks for coming and celebrating with us.

We then shared the news with Hudson and Lola.   They took the news even harder.......fights ensued and shirts were torn.  It was ugly. 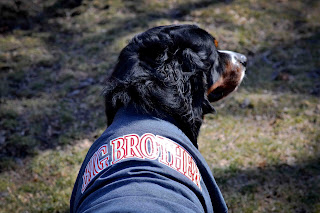 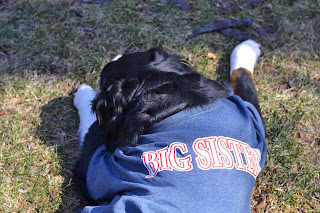 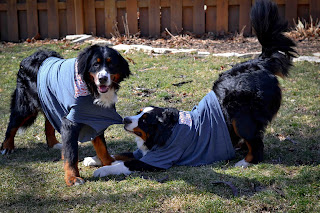 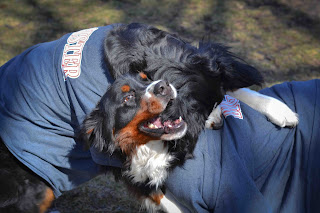 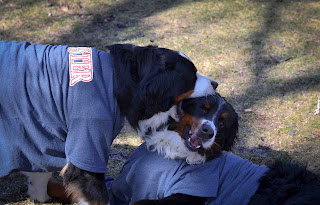 We are still working through this.
4 comments:
Posted by Unknown on Wednesday, March 14, 2012
Labels: Babies, Baby K, Puppies
Email ThisBlogThis!Share to TwitterShare to FacebookShare to Pinterest

Straight up, it's been a crappy week.  It has worn me out mind, body and spirit but fortunately God blessed me with a beautiful and relaxing weekend (and a husband who worked overtime to let me rest) so I could refresh and reload.  I'm very thankful.

Not to go into ALL the gory details, one thing that made this week so crappy was our visit to Madison, WI for Hudson's MRI.  It was a long day with a long drive that started out on the wrong foot and ended with getting our feet kicked out from under us.

Hudson did great through the entire day.  He is so sweet and just wants to please everyone around him. He couldn't be difficult if he tried and we wouldn't blame him if he was.  He has been poked, prodded and driven from vet to vet, not to mention now wearing diapers.  Poor baby. 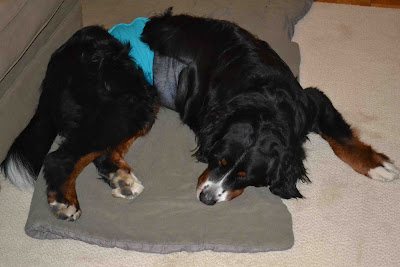 We have been holding off on the diapers hoping to get good news at the MRI but unfortunately the news was worse than we thought.  I was pretty certain the MRI would confirm the Wobbler's disease but I wasn't anticipating that it would show us that his ENTIRE SPINE is affected by the disease instead of 2-3 locations.  That means there really isn't much we can do moving forward.  If you didn't read my other posts regarding Hudson, Wobbler's disease is where the bones around the spine continue to grow literally crushing the spinal cord slowly causing paralysis.  It is often found in large breeds like Berners, Mastiffs and Great Danes.  It is a genetic disease that usually affects the spinal cord in the neck region but unfortunately Hudson's spine is being crushed in many locations.  Surgery would be too invasive and extensive - too much for his body to take and if successful and he survived it would only halt the paralysis not reverse it.  So currently he is on a steroid to reduce some of the swelling in hopes to help improve his walking and coordination but it isn't a long-term solution.  I am just so thankful that he is not in pain and this will never cause him pain.  He is our same happy, sweet and loving little boy- he just walks like he's had one too many. 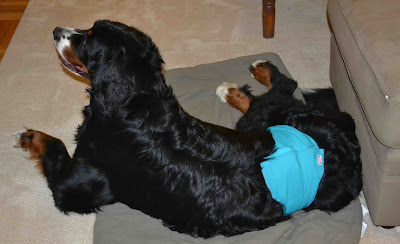 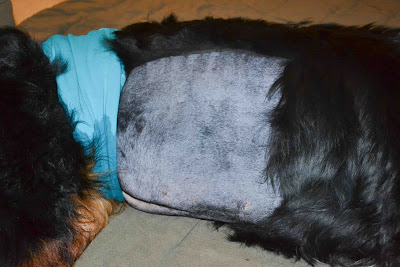 And his freaky shaved belly from the MRI.
He looks so goofy walking around.  You can see here that he has already soaked through his diaper.  We really like the diaper and is already saving a lot of scrubbing, washing and cleaning but we'll need a lot more of these to keep up so he doesn't sit in wet diapers for long.  And to think, in a few months we'll be changing diapers on our furry baby and our human baby....not gonna lie, it frightens me a little.

But I am happy to do it as along as there is a wet, little bum to diaper.  And truthfully, I hope it is a good, long time.  We love our Hudson so much and 3, 4, 5 years just isn't enough time with him.  That is why we cant worry about how long we may have and we just need to enjoy each day with him, making him happy and comfortable and feeling so very loved!!

Thanks everyone for all your sweet comments and encouragement.  The more I explore this world of blogging the more I fall in love with all the amazing people like you, my readers, who make this community so unique and so uplifting.  This is technology at it's greatest!  Thank you!
4 comments:
Posted by Unknown on Sunday, March 11, 2012
Labels: Puppies
Email ThisBlogThis!Share to TwitterShare to FacebookShare to Pinterest

I was home alone when I saw the pink lines and I immediately knew I wanted to share the news with Brandon in a special way - on his birthday.  That meant keeping the secret for two whole days....torture!  Since we were going to dinner just the two if to celebrate I decided to wrap a little "birthday gift" for him. 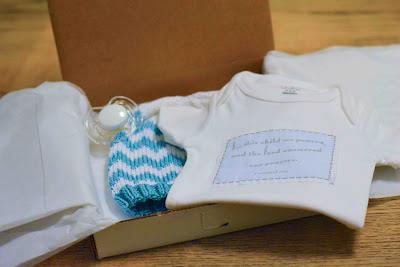 I included a pacifier, a baby hat and a onesie. 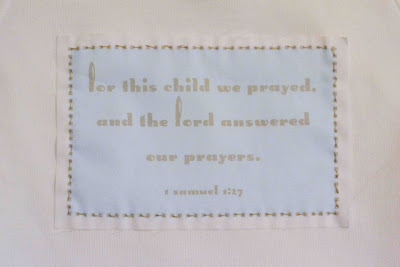 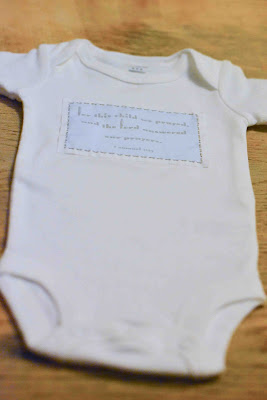 I printed a fitting verse on a onesie:
"For this child we prayed, and the Lord answered our prayers."
1 Samuel 1:27
and placed that on the top so it would be the first thing he read upon opening.

The day of Bran's birthday dinner a snow storm decided to roll through threatening our plans.  Nothing was going to stand in my way though- even when the restaurant called to confirm if we were still planning on heading out in the storm for our reservation.  We may have been the only people in the restaurant for a good portion of the night but I didn't mind keeping a large restaurant open just for us.  I could not keep this news to myself any longer.  So I pushed my gift on him every 2 minutes from the moment we sat down.  Each time he said in a little bit.  It got awkward.  Then I forced him to open the gift and it got more awkward.  He caught on pretty quickly but it put him into a state of shock that took the entire meal to combat.  A very happy shock of course.

Needless to say he won't forget this birthday.

Next up how we told our families......
8 comments:
Posted by Unknown on Thursday, March 08, 2012
Labels: Babies, Baby K
Email ThisBlogThis!Share to TwitterShare to FacebookShare to Pinterest