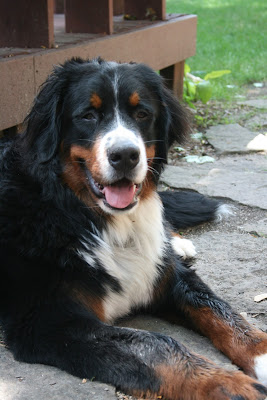 I do not have children to blog about so will you indulge me with a recent puppy "parenting" conundrum?  Our lovable, beautiful 2 year old pup, Hudson, is experiencing some deep psychological issues.

I know, that's what we have been saying for the past few months but it has become very clear to us that our dog is not normal.  Very far from it.

We first noticed something was off this summer when he started peeing and pooping all over the house.  It got progressively worse and to the point where he was having accidents about 5-6 times a day.  You could not scold him for this because it made him have an accident on the spot and get markedly "depressed".  Every time we took him to the vet they told us that it was an issue of training.  Despite the fact that I was a bit personally offended by this - hah - it didn't seem right to us.  Every time he had an accident you could tell he felt bad and was scared.  He knew he wasn't suppose to go in the house and he ALWAYS tried making it to the door.  Each time he had an accident it sent him farther into this scared, uncertain and unhappy puppy.  It has been such an awful thing to witness.

Well we finally saw another vet and figured out that he had swollen glands that caused him to be incontinent.  I won't go into the details but every month we take him in and they help him feel better.  This seemed to help a bit but he still wasn't getting back to the Hudson he was.

So another trip gave us the diagnosis of ANXIETY.  In a dog.  This one was hard to swallow.  They wanted to put him on anxiety medication - the same medication they give to humans.  We resisted for awhile not knowing what to think about Hudson possibly having anxiety..... Are dogs even capable of suffering from anxiety?  I mean this isn't our child.  It is our pet.  Do you really pursue treatment for something like anxiety in dogs?  Do you spend the money on a prescription?  A daily, life-long prescription?  I don't know what I think about this.  I am still very confused about it.  I just don't know.

Wel a little back history on Hudson - from day one he has proved to be a little extra sensitive.  Any loud noises or tension (aka. fighting) would and still does cause him to run upstairs and hide in our bed.  I mean even shouting at a football game brings him right upstairs.  We have to go up there and literally reassure our DOG that everything is okay.  Weird?  Yes, weird.  Other than that strange quirk Hudson was completely normal and happy.  Very easy going.  When we added Lola to the mix, they got along great right away and had fun playing.  He was one at the time and still very young and playful.  They were buddies.  He even shared his bones. 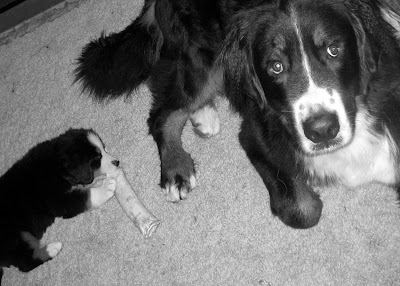 It is a possibility that Lola's existence is a small factor in his "problems" but really she was already a year when his symptoms started.  And like I said, they still really love each other and he always is happy running around the yard with her.  So I do not think that Lola caused TOO much anxiety.

The more we thought about it and watched Hudson it did become clear to us and our families that Hudson was unhappy, uncertain and mostly fearful.  He always seems on edge.  He won't lie down, he cannot relax at all and the smallest noise or movement makes him jump.  I mean JUMP.  The large 100 lb. dog literally jumps to his feet and stands there in a weird hunched position.  The same position that he maintains most of the day.  He also does this lip curl thing where he looks like he is frowning.  Or mad.  Given his sensitive pre-disposition we think that Hudson may be a bit "depressed and unsure" or whatever the dog equivalent would be.

My diagnosis:  I think that Hudson's gland problem, which is very painful, was unsettling to him.  I think the fact that he could not control himself caused him to feel bad and scared because he was trained well and knew that it was wrong to go in the house.  I think that since it took the vets so long to diagnose his gland problem he got used to going potty wherever, he got use to not being able to control it, so he has regressed in his training and is use to just going.  All of this took a toll on Hudson's sensitive personality and made him sad.  Also the craziness of this fall with the kitchen remodel and lots of contractors in and out of the house and lack of space for him upset his routine and further added to the problem.

So all that to say, right before Christmas we decided to try a trial run of the anti-anxiety medication for him.  We have started to re-train him with positive reinforcement and are working on giving him more of a routine and stability.  We have noticed a change.  He seems happier and has gone several days with none to extremely minimal accidents.

He's not there yet though.  It will be a long process and hopefully we are correct in our understanding of Hudson so that we can continue to help him feel better and healthier.  More like the sweet, happy puppy we first brought home. 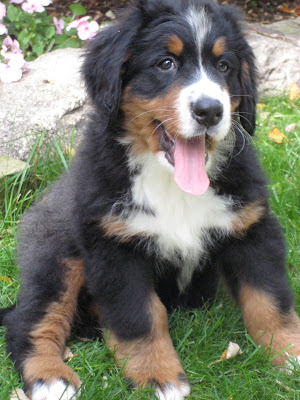 Aww....so cute.
So do any of you have any insight into Hudson's issues?  Have you heard of something similar?  Or maybe you have dealt with something like this?  We love our little guy a lot and just want to see him happy and healthy.
Thanks for listening.
Posted by Unknown on Monday, December 27, 2010
Labels: Puppies
Email ThisBlogThis!Share to TwitterShare to FacebookShare to Pinterest

Don't you wish our dogs could talk just to tell us how we can help them?
Our dog Buddy runs to the Bedroom when someone yells at a hockey or football game, since we got him at 3 years old we always figured his original owners yelled at him.
I believe we (along with the assistance of our vets) tend to Humanize our animals, I love how Cesar Milan teaches people to get back to thinking of the dog and their natural instincts. Bernese Mountain dogs were bred to pull and are capable of pulling wagons with weight ... dogs love to have a job ... does Hudson have a purpose that makes him happy? Do you watch the Dog Whisperer at all?

Yes, I really do. I can't imagine how mom's do it with small children who can't talk yet - so stressful and scary. But thanks for the suggestion of pulling carts. We did know that is what they are bred for and one other person recently suggested we give Hudson a job and some purpose. I think we are going to get him a harness and try it this week. Why not?! It seems fun too. Thanks!!

Keep me posted on how he does, it sounds like fun.
Both your babies are so adorable, their eyes show so much compassion.

Our precious Jade also suffers from anxiety in the car. Jade loves going to the dog park but I physically have to lift 60 pounds into the car and then the saliva begins to flow like a faucet. She is soaked and so is my car, windows etc. Once out of the car she plays, runs and enjoys herself until we head back to the car. She plants her paws and looks pathetic.

In addition, she is a shadow watcher (going crazy watching reflections of light) which our Vet says is an obsessive compulsive problem. We can get her to stop by breaking her gaze but it is weird.

Anyhow, she is about 20 months old and has been on Prozac for about a year. This Fall I reduced her dose from 20mg down to 10 mg and the drooling was once again out of control. So, it seems to help but I hate medicating her to go to the park. I didn't notice any effect on the shadow/reflections.

Last night, I read and article on the "Thundershirt" for dog anxiety.www.thundershirt.com The claims are that the Thundershirt’s gentle, constant pressure has a dramatic calming effect for most dogs if they are anxious, fearful or over-excited. I work with children some with autism and sensory issues who crave "cocooning' or being wrapped tightly in a towel or blanket or sandwiched into a beanbag but never thought about this for Jade. This made so much sense that I just ordered Jade a Thundershirt with hopes that the gentle, constant pressure calms Jade. I ordered it in heather grey and went without monogramming at this time. Ha ha!

There is lots of info on the website too! http://www.thundershirt.com/AnxietyResearch.aspx

Oh, poor Jade! It is so hard to know with the dogs what is best and how to really help them. We too have noticed a difference with Hudson and his medication. It definitely makes him happier. He is able to relax more now and he wants to be around us. It is so nice to have him back but it is a bummer he has to be on medication.

I really like your idea of the thundershirt. We have noticed that Hudson loves to be wrapped up in blankets and towels. That is one way we cheer him up. I never really thought about it being helpful to his anxiety but I can see why they like it. I am excited to see how Jade responds. I hope it helps! If so, I will definitely be ordering one for Hudson. If it doesn't scare him - he will love it! He is easily frightened still.

Thanks for sharing Mrs. Wood! I hope Jade's anxiety lessens. It is so hard to see them like that.

You could also make sure to not unintentionally encourage his anxiety with affection. When a dog is scared or nervous people's first instinct as humans is to hug them and pet them to comfort and calm them. But to a dog this positively reinforces the anxious behavior. As mean as it seems to restrain from comforting a dog when it is clearly scared, it really is the kindest thing you can do.