Wedding Week: How It All Began

Brandon and I will celebrating our 2 year anniversary this August 9th.  I cannot believe how fast it has gone by - it really has been a great two years (more on that later - I can't jump ahead of myself).  In honor of the occassion I am declaring this week Wedding Week with all posts dedicated to us, our big day and other fun wedding tidbits too.  I was wanting to end Wedding Week with a large post about our 2 year anniversary but you may have to wait awhile for that.  Unfortunately (but fortunately at the same time) Brandon is taking his final of four tests for the CPA exam.  While we are totally pumped about that, it does mean that the celebrating with be on hold until mid-August when we can REALLY celebrate.  I promise to make up for it with lots of goodies.
The best way to start Wedding Week though, is to bring you back to the beginning so you can read all about how our crazy love story came to be.
I have mentioned it before but I met Brandon in fifth grade and thought he was like totally super cute.  My friend Alli (who just happened to get married last weekend- congrats) brought me to her vacation bible school where she introduced me to Brandon.  We went to different churches but would often take part in eachother's youth groups and well after meeting Bran I just had to keep coming back.  It was a smaller church and therefore a small youth group but it was the best youth group and I am not saying that because Bran went there.  We really became a tight group of friends and fortunately are still really well connected today.  Back to our story though....Finally by sixth grade I had him thinking the same thing about me.  I don't remember how it happened but soon we were "dating"....or whatever the middle school equivalent was.  For Valentine's Day his mom brought him over to my house and waited in the driveway while he dropped off chocolates and a little stuffed animal (which I still have!)  I gave him an Everclear CD which he doesn't have anymore.  The difference between guys and gals. haha.
Here is Bran and I in sixth grade at his grandparent's lake house (which they still own and we visit regularly - so weird). We went there for a youth group retreat. 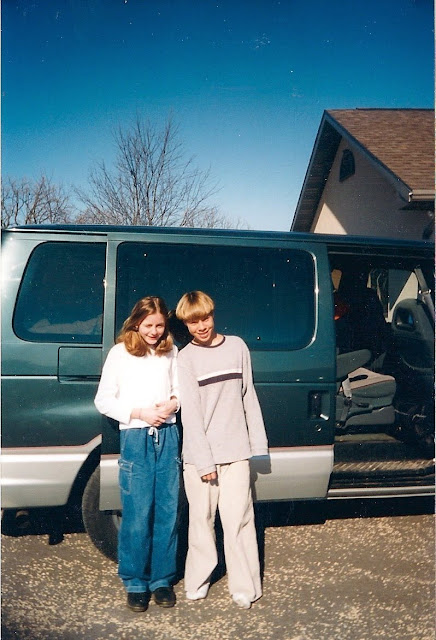 This is actually quite embarassing - I think this was taken about 13 years ago.
Well needless to say we only lasted a few months....he broke up with me.  Through an email that said, and I quote exactly, "I just want to be friends."  No hello, no goodbye, no name even.  Haha....we were still friends and not too much changed.  We still went to youth group and hung out and had a grand 'ol time.  I never really did stop liking him though.
Fast forward a few years and many somewhat essential details that I won't bore you with and we somehow started hanging out again.  We had gone to different schools in the area (he at a private and I at the public) so our paths didn't cross much once we went off to high school and youth group ended.  But fate intervened for us and we became friends again.  I still liked him, all our friends knew, he may or may not have and I tried pretending like I didn't.  So after a few years of being "friends" my senior year turnabout rolled around.  I was suppose to go with my best guyfriend (who happened to be his best friend -one of those somewhat essential details) but plans changed and he had to travel for soccer so I was resigned not to go but my friends intervened and set it up so I would ask Brandon.  Truly, they somewhat schemed and set it up.  They even had it arranged with his mom.  So I asked him with their help and he actually said yes and we went to my Turnabout.
Here we are. 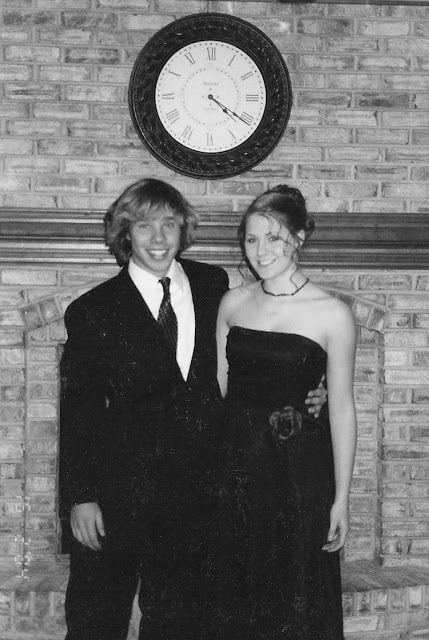 Well that night turned out to be a very special night.  You see Bran put his arms around me and held my hand A LOT - Brandon didn't normally do those things, actually he never really did those things so it meant a lot and it ended up that we were a "couple" by the end of the night.
And we just kept on dating through all four years of college.  And then we got married and here we are a total of 6 1/2 years later - married with two dogs.
Though I liked him forever, I really never ever thought we would actually end up together.  Really.  I never gave a relationship much thought.  I just liked him and thought he was someone special - which he is.  Someone very very special.
Did I mention that neither one of us ever dated anyone else?  Cause we didn't.  We were always eachother's one and only.  I think that is pretty special.
Here are some pictures of us at his Junior/Senior dance later that year and at my prom around the same time. 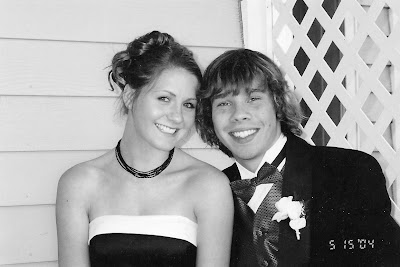 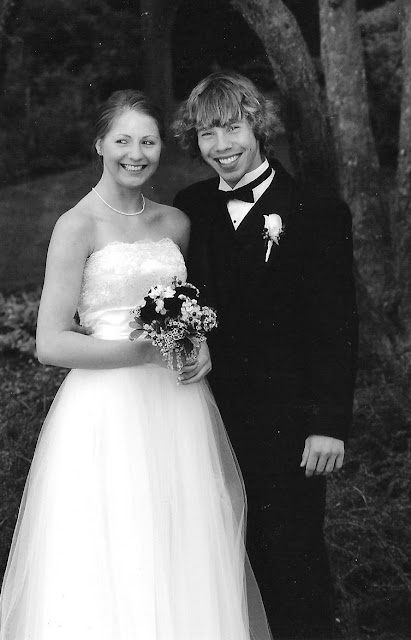 Thanks for stopping by and hearing our cheesy love story.  Now that you heard where it stared I feel that I can adequately cover the wedding.
Posted by Unknown on Sunday, August 01, 2010
Labels: Celebrations
Email ThisBlogThis!Share to TwitterShare to FacebookShare to Pinterest

you guys are an adorable couple! i totally remember those cargo pants that girls used to wear!
i can't wait until you have non-furry babies. they will be gorgeous! :)

oh my jess! what a fun idea :) i LOVED reading the ups and down of your romance :) so beautiful! wheaton youth groups sure have a way of bringing hearts together! congratulations on 2 years... you're an inspiration!