This has been a strange weekend.  Straight out of the twilight zone.  That may be a slight exaggeration but there have been enough unexplained things happening around this house that it has set me quite on edge.  It started out small enough and was easy to dismiss. 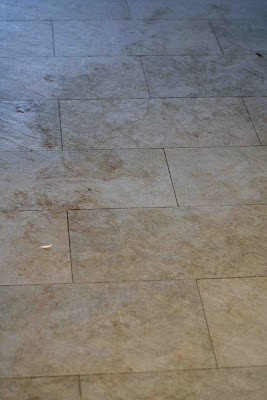 Saturday morning we awoke to a strange and excessive amount of what appeared to be dirt in the shape of many paw prints all over our kitchen floor.  Now ordinarily this isn't a strange thing to find at all, in fact it is quite common.  We have two large dogs who have the horrible habit of digging - with this Chicago weather it is near impossible to keep our kitchen floor clean.  What makes it strange is they had not recently been outside.  In fact they were inside most of the evening and when we locked them up for bedtime they had not been outside in many hours.  Our kitchen floor was clean and they did not have dirt on their paws.  If so, the evidence would have been all over my carpet.  So it was bizarre when in the morning we awoke to find such a thick and dark layer (darker and thicker than the above picture) of dirt on the floor.  It was as if our dogs had escaped in the night, had a joy ride in the mud and sneaked back into the house just in time for morning.  Which of course they could not have done.  It was creepy!  Oh and in case you are wondering it is not smeared poop - we stuck our noses in it many times.  Not proud of that but you do what you have to do. 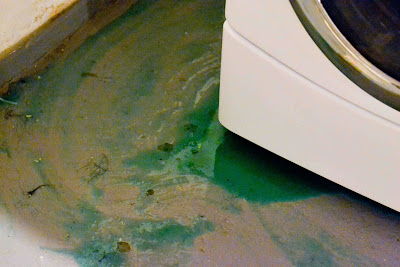 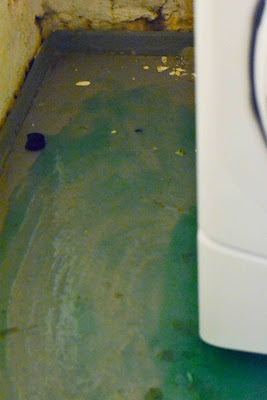 Then later in the day as Bran went downstairs to do some laundry he discovered a brand new bottle (jug really) of detergent had fallen and spilled all over the floor - under both the washer and dryer.  It was a disaster and quite messy for something intended to clean.  Again, my camera wasn't readily on hand but I quickly snapped the above photos towards the end of our cleaning rampage.

By far the strangest and most unexplainable event took place once again when we awoke Sunday morning.  I'm still baffled by what we found. 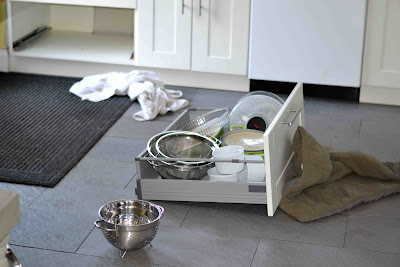 The drawer full of heavy Le Creuset dishware and other miscellaneous items was found in the middle of the kitchen, right next to Hudson's bed.  First of all, this drawer is heavy.  Second, it locks in.  You can't just pull it out easily.  And thirdly, we did not hear a thing through out the evening and this had to be loud.  Metal strainers and ceramic pots were strewn across the floor and the mere noise of dragging the drawer on the hard floor had to be loud.  Lastly, Hudson was still laying on his bed when we came down.  Right next to the drawer.  If you have read my blog you may know that Hudson has some issues - a little anxiety and a lot of fear.  And he pees - a lot.  There was not a drop of pee on that kitchen floor.  The dogs acted as if nothing happened and nothing disturbed their sleep.  It was strange. Very, very strange.  Oh and I forgot to mention that once again there was the mysterious, excessive amount of dirt on the floor.

So as of tonight, the mystery still stands.  What are our dogs up to when we turn out the lights and lay our heads down.  I am becoming very tempted to purchase one of those video baby monitors........very tempted.

is there any chance it could be another kind of critter? The paws and the jug falling makes me jump to raccoon, but I don't think a coon could pull out a heavy drawer... does anyone sleepwalk? hm.

Ooh, I am so curious about your mystery! Keep us posted on what happens!

Wow! Wacky. I would for sure set up a camera to check the action.

oh my gosh you have me so interested!! you need to find out what it is!!! that is so crazy and now i really want to know!! lol!

pins and needles. you have to find out and let us know. ") quickly!

I am so glad you guys didn't laugh in my face. I thought for sure I was going a bit crazy but it is freaky isn't it?

We still don't have answers but this morning we didn't wake up to anything weird. Step one.

This is the only theory we have going right now....one of the dog's collars must have attached to the handle of the drawer and whichever dog it was must have yanked and pulled until it came out - the not waking us up part is still confusing though. In regards to the mud - we are thinking that maybe it was throw up?! Gross I know but who knows what else it could be.......

We have ruled out raccoons - the dogs would have definitely barked and barked a lot and we are ruling out humans entering our home thank goodness because the dogs would have barked even more! We have a small home - very small and there is no way we would not wake up to barking.

Thanks for your reassurance and theories - you are all the best blog friends ever!